The Seminole tribe of Florida will cease making paying $350 million a year in revenue-share payments to the state, effective immediately. 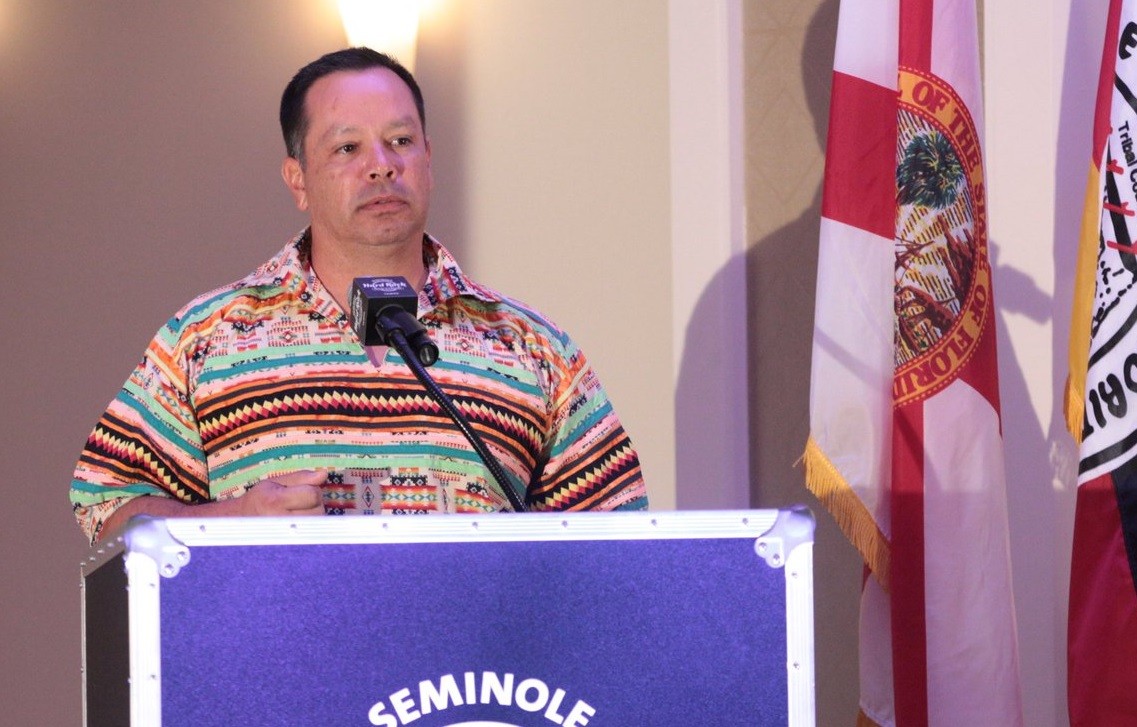 Seminole tribal chairman Marcellus Osceola Jr. said the tribe would reconsider payments if the state is able to resolve the issue of “illegal banked” games offer by parimutuels. (Image: Twitter)

Local media reports the tribe — which operates Florida’s Hard Rock-branded casinos — hand-delivered a letter from Seminole chairman Marcellus Osceola Jr. to Gov. Ron DeSantis Tuesday announcing that one of the biggest tribal gaming revenue-sharing deals in the United States was off the table.

The state has been given an out, though: eliminate player-designated games from racetracks and other parimutuel venues and the Seminoles might reconsider their position.

The tribe agreed to the revenue-sharing plan in 2010 in return for exclusivity on banked games like blackjack but argues the player-designated games breach the deal.

The Seminoles have continued to make payments to the state “in good faith,” despite a 2016 federal court judgment that ruled the tribe could offer blackjack until 2030 without the state’s approval because the Florida officials had violated the Indian Gaming Regulatory Act by authorizing the disputed games in 2011.

Under a temporary deal thrashed out with former Gov. Rick Scott in 2018, the payments would continue, but only if the state “aggressively enforced” the tribe’s exclusive rights to offer banked games in Florida.

Last-Ditch Deal Runs Out of Time

But lawyer for the tribe Barry Richard told Florida Politics Tuesday that enforcement “absolutely did not occur.”

“Actually, the state stopped all enforcement efforts,” he added, and the tribe’s patience wore thin.

Last-ditch negotiations to fashion a new compact fizzled out with the end of the legislative session early this month.

The tribe agreed in principle to a 31-year deal with Senate Republican leaders that would have allowed it to offer sports betting, roulette and craps, but the legislature made little effort to push the deal through. Richard suggested the tribe was aggrieved by the inaction.

April 2010: Tribe and the state sign a $1 billion, five-year compact deal that allows the tribe to offer house-banked card games like blackjack at its casinos, as well as slot machines at most of its locations

July 2015: The compact expires but the tribe continues to offer blackjack because it claims the state violated its exclusivity on house-banked gambling by permitting the pari-mutuel venues to offer player-designated games.

Dec 2015: Former Gov. Rick Scott negotiates a new $3 billion deal with the Seminoles that would have allowed them to offer roulette and craps, but the legislature ultimately rejects it.

Nov 2016: A federal judge sides with the tribe, ruling Florida breached the 2010 compact by approving player-designated games, giving the tribe the right to offer blackjack until 2030 without a compact.

April 2018: Gov. Scott strikes deal with the Seminoles that would see them continue to make payments in good faith and in return for state enforcement against player-designated games.