FRANKFORT, Ky. – Kentucky took the first step toward legalizing sports betting on Wednesday as a state House committee unanimously passed a House Bill 137 with a couple of revisions from the original bill. 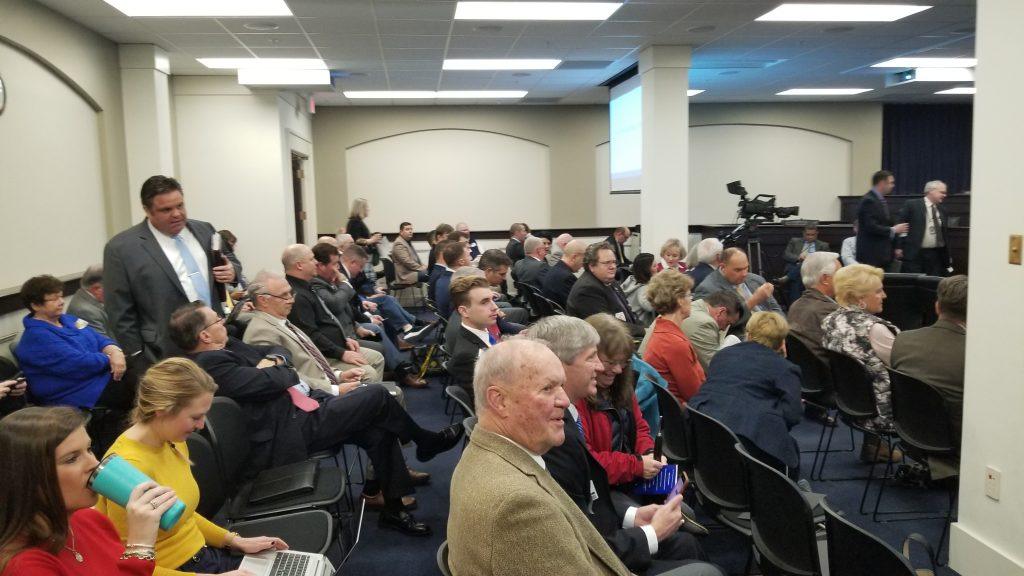 A capacity crowd gathered at the Kentucky State Capitol in Frankfort Wednesday for the first hearing on a bill to legalize sports betting in the state. (Image: Casino.org)

With the committee room filled to capacity with interested onlookers, the House Licensing, Operations, and Administrative Regulations Committee needed less than 40 minutes, with little question or discussion, to advance to the bill sponsored by state Rep. Adam Koenig, the panel’s chairman.

The most notable of the changes made Wednesday was the removal of the ban on in-state college sports teams. Koenig said that was the most common complaint he heard from his colleagues in the General Assembly and others interested in sports betting. Keeping games involving Kentucky and Louisville off the board would likely lead bettors to gamble in another state or through an illegal bookie or offshore site.

We’re trying to push people to the legal market,” he told reporters afterward.

In a joint statement to Casino.org, the Kentucky and Louisville athletic departments said the schools will remain neutral on the bill even with the college ban removed.

“Our priority is to protect the best interests of our student-athletes,” the statement read. “Even as we know that state and federal officials will be charged with enforcement of these issues rather than our respective compliance offices, we will continue to be proactive in educating our student-athletes about the issues surrounding sports wagering in order to protect their welfare and the integrity of competition.”

John Farris, an economist with Commonwealth Economics and a former Kentucky Finance Cabinet Secretary, provided the committee with an updated impact statement. With in-state college games now in play, he estimated the annual tax revenue at $22.5 million.

That revenue forecast is based on an adjusted gross revenues of $48 per capita, which is what analysts expect New Jersey to reach as its market matures in the next four years. Farris and his staff took that number and applied it to Kentucky’s adult population.

The Kentucky Horse Racing Commission (KHRC) would oversee sports betting in the state. The state’s five horse and two harness racing tracks would have the chance to apply for licenses as would professional sports arenas that seat at least 50,000. The only facility that qualifies for that is the Kentucky Motor Speedway.

Each sportsbook would have the opportunity to offer an online sports betting application. Bettors would need to initially register at the track in order to bet online, but another amendment limits that registration restriction to 18 months, meaning after Jan. 1, 2022, bettors could simply download the app from anywhere in the state. The previous version of the bill did not sunset the in-house registration requirement.

The state would tax the retail books at 10.25 percent of their adjusted gross revenues (with .5 percent going to thoroughbred and standardbred racing funds). Online sports betting applications would be levied a 14.25 percent tax. Five percent of the tax revenue generated would go toward problem gaming assistance programs.

Adults 18 and up would be able to place sports wagers. That’s the same legal age for betting on races.

The same committee passed Koenig’s sports betting bill last year, but it didn’t get a floor vote because, as revenue generating legislation, it needed 60 votes in the 100-member chamber to pass in an odd-year session. As this year’s session involves budget negotiations, it will only need a simple majority to pass.

It already has the support of Gov. Andy Beshear.

Koenig did not have a timeframe for when the House may consider the bill, but he’s hoping to get it there quickly. Wednesday was the seventh day of a 60-day session that must end no later than April 15. The Louisville Courier Journal reported a floor vote could take place by Friday.

“We are going to do some work to maximize the amount of votes we get so we can send it to the Senate with as many votes as possible,” he said.

Martin Cothran a spokesman for the Family Foundation of Kentucky spoke in opposition to the bill. He said efforts to pass sports betting through legislation run afoul of the constitution, which limits betting to pari-mutuel wagering, the state lottery, and charitable gaming.

“I’ve walked the halls of this legislature for 28 years… and I’ve been involved in gambling debates for most of those 28 years, and with one or two exceptions, the assumption has always been the same: An expansion of gambling requires a constitutional amendment,” Cothran said.

While Cothran equated sports betting as a game of chance, on par with forms of gambling banned in the state, Koenig reminded the committee that the writers of the state’s current constitution had a chance to include a specific ban on baseball gambling back in the late 19th century. The framers turned down that proposal, Koenig said, which now allows the state to pass just a law.