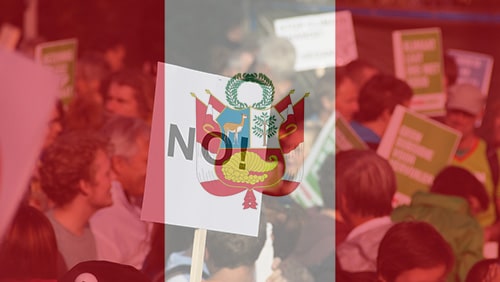 Casino employees in Peru have had enough. After being forced to be out of work for eight months due to the COVID-19 pandemic, they are becoming increasingly frustrated and want the government to figure out how to let them back on the job like other countries have been doing. They have been more and more vocal as the shutout wears on and decided that rallying in from the country’s Congress yesterday would be the best way to make sure their collective voice was heard.

Local news outlets in Peru report that more than 50,000 workers took to Peruvian streets in various parts of the country yesterday to protest the ongoing shutdown. Many countries have figured out how to let their gambling industries begin to open, as long as they comply with certain health protocols, but Peru is still ignoring the possibilities. Despite the fact that certain casinos, like those in some U.S. states, have had to backtrack as new COVID-19 cases mount, there has still been a lot of progress made since this past July.

At the beginning of November, Peru’s National Chamber of Tourism sent a letter to the country’s then-president, Manuel Merino, asking that the casino industry be allowed to reopen, citing health protocols and measures that had been established by the Ministry of Foreign Trade and Tourism. Merino never responded and, as the country became gripped with protests over what was seen as a lack of support for the people, he resigned less than a week into his tenure. His predecessor, Martin Vizcarra, didn’t do a much better job, and was ousted in a major bribery scandal that hit the country.

Speaking to local media, a spokesperson representing the frustrated casino employees, Johan Escalante, asserted, “We’re already in compliance with protocols. All betting rooms have been adapted to comply with the guidelines established by the Ministry of Health and by Ministry of Foreign Trade and Tourism. We already have an approved pre-protocol the [authorities] haven’t published it yet.”

Studies have already shown that casinos are among the least possible places where COVID-19 spikes could originate. Peru is not in a position that allows it to maintain an apathetic approach to recovery, with tax losses of more than $232 million already being reported just from the gambling industry. The prolonged stoppage will only make matters worse and, with 112,000 direct and indirect employees affected by the casino shutdown, there’s little chance that recovery will be seen anytime soon.

Peru’s new president, Francisco Sagasti, took office about a week and a half ago. He became the fourth president in five years and has his work cut out for him. A political centrist, he may only hold the office for around eight months, as national elections are coming next July. In addition to the public protests, the coronavirus pandemic and being a first-time legislator, Sagasti will also have to deal with claims that more than half of the 130 members of Congress are under investigation for fraud and corruption.